Head of macro and financials at HC, Monette Doss commented: “Egypt’s inflation remains closer to the lower end of the CBE target range of 7% (+/-2%) for 4Q22, and we expect it to average 5.6% in 4Q21. We believe that the Federal Reserve’s recent announcement of unlikely interest rate hikes in the near future partly relieved the pressure on Egypt’s treasury yields by renewing the interest in emerging markets carry trade. Accordingly, Egyptian treasury bill yields declined by an average of 40 bps since mid-August, reflecting higher foreign portfolio inflows during August. Foreign holding of Egyptian treasuries increased to USD33.0bn in August from USD29.0bn in May, according to S&P Global Ratings. We also believe that a rebound in foreign currency receipts from tourism following the resumption of Russian flights to Egypt’s Red Sea resorts released some interest rate pressure on the EGP. Going forward, we believe that the interest rate action of other emerging markets will determine the pace of future declines in Egypt’s treasury yields. Currently, Turkey offers c19% on its 1-year treasuries (hence a real yield of 5.45% given zero taxes and Bloomberg 2022 inflation estimate of 13.4%) compared to Egypt’s real yield of 3.0% (given our 2022e inflation forecast of c8% and 15% taxes for European and US investors). Also. according to CBE data, the corporate borrowing rate is currently at around 9.4%, while the risk-free after-tax rate is around 10.4%. Therefore, we believe that any interest rate cuts at the moment could lead to a wider gap between the corporate and the risk-free rates, with the corporate rate being on the lower end. We accordingly expect the MPC to keep rates unchanged in its upcoming meeting.”

It is worth mentioning that, in its last meeting on 5 August, the Central Bank of Egypt’s (CBE) Monetary Policy Committee (MPC) decided to keep rates unchanged for the sixth consecutive time. Egypt’s annual headline inflation came in at 5.7% in August, with monthly inflation increasing 0.1% m-o-m compared to an increase of 0.9% m-o-m in July, according to data published by the Central Agency for Public Mobilization and Statistics (CAPMAS).

HC Securities & Investment (HC) is a leading investment bank in Egypt and the MENA region. Since its inception in 1996, HC has utilized its relationship-driven insights, local and regional market knowledge, and industry-specific expertise and strong execution capabilities to provide its clients with a wide range of services in investment banking, asset management, securities brokerage, research, custody, online trading and private equity through its offices in Egypt and the UAE (DIFC). HC Investment Banking has an outstanding track record of advising leading corporates in Egypt and the MENA region on M&A, capital market, and financing transactions in excess of USD6.2bn. HC Asset Management, winner of the 2018 MENA Fund Manager Awards, now manages 9 mutual funds for commercial banks and portfolios for institutions and sovereign wealth funds with assets under management in excess of EGP6.8bn. HC Brokerage is ranked among the top brokers in Egypt and provides a wide array of services, including research and online trading to institutional and retail clients.

Head of macro and financials at HC, Monette Doss commented: “February inflation figures came in lower than our estimates of 4.9% y-o-y and 0.5% m-o-m, which we believe reflects suppressed consumer demand currently. Over the rest of 2021, we expect monthly inflation to average 0.8% m-o-m and 6.4% y-o-y accounting for possible domestic price shocks following the recent commodity price rally and possible recovery in consumer confidence following the successful rollout of the COVID-19 vaccine. Our numbers rule out domestic gasoline price increases since the current market price reflects a Brent price of USD61/barrel (as estimated in the FY20/21 government budget). We estimate FY20/21e average Brent price at USD54/barrel, as it averaged USD44/barrel in 1H20/21 while Bloomberg consensus estimates for 2H20/21 come at USD62/barrel. We, therefore, expect 2021 inflation to remain within the CBE’s target range of 7% (+/-2%) for 4Q22. On the external position front, however, we believe that Egypt currently relies on foreign portfolio inflows as a main source for foreign currency given slashed tourism revenue and low exportation activity. Hence, with treasury yield hikes in the USA as well as different emerging markets such as Turkey, we believe that the CBE has limited room to undertake further interest rate cuts in its upcoming meeting. We believe that global interest rate hikes reflected in a decline in average monthly portfolio inflows in Egyptian treasuries to USD1.25bn during January and February from USD2.29bn in 2H20. We, accordingly, expect the MPC to keep rates unchanged in its upcoming meeting. That said, we note that Egyptian 12M treasuries currently offer a real yield of 5.1% (given a nominal yield of 13.3%, 15% tax rate on treasuries’ income for American and European investors and our 2021e average inflation forecast of c6%) which is higher than Turkey’s real yield of 2.0% (given nominal yield of 15.7% on 14M treasuries, zero tax rate, and Bloomberg 2021 inflation forecast of 13.7%).”

It is worth mentioning that, in its last meeting on 4 February, the Central Bank of Egypt’s (CBE) Monetary Policy Committee (MPC) decided to keep rates unchanged for the second consecutive time after undertaking cuts of 50 bps twice in its September and November 2020 meetings. Egypt’s annual headline inflation accelerated to 4.5% in February from 4.3% in the previous month, with monthly inflation increasing 0.2% m-o-m reversing a decline of 0.4% m-o-m in January, according to data published by the Central Agency for Public Mobilization and Statistics (CAPMAS). 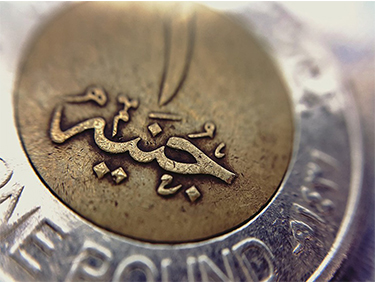 Head of macro and financials at HC, Monette Doss commented: “Inflation levels remains subdued coming in well below the CBE target of 9% (+/- 3%) for 4Q20 and also less than expected 4.6% y-o-y for July, which we attribute to low consumer demand arising from increasing unemployment and plunging consumer confidence. This together with a delay in expected tourism recovery prompt us to downward revise our 2H20e average inflation expectation to c6% y-o-y from c8% y-o-y, previously. In our new estimates, we remain cautious accounting for possible supply shocks. We hence, expect monthly inflation to average 0.8% m-o-m in 2H20e up from an average of 0.4% in 1H20. As of June, real interest rate on deposits and loans came in at 3.4% and 5.6%, respectively, significantly higher than their 12-year average of -3.5% and 0.7%. The high real interest rate environment, however, is justified by the low interbank liquidity, global economic uncertainty and the domestic funding gap, in our view. We take the CBE open market operations as a proxy for interbank liquidity. The figure came in at EGP420bn in June representing 13% of total banking sector local-currency deposits, below its 2008-2020 average of 22% (excluding 2011-2014 which witnessed post-revolution liquidity dry-up).”

“Moreover, following the outbreak of COVID-19 in Egypt in March, foreign portfolio outflows from Egyptian treasuries amounted to USD17bn increasing Egypt’s FY19/20e domestic funding gap to USD21bn, representing c6% of GDP, and taking Egypt’s foreign debt to an estimate of USD125bn in June from USD109bn last year. Using the Sharpe ratio for yields on Egyptian treasuries as well as other emerging markets, we believe that at current levels Egypt provides the highest risk-adjusted return coupled with low currency volatility, second only to Argentina whose currency display significantly high volatility. We believe this permits the government to remain on current interest rate levels, despite the increase in funding gap. We believe that this is behind the recent rebound in foreign portfolio inflows into Egyptian treasuries said to amount to USD3bn during the first 2 weeks of July, according to unnamed banking sources. That said and despite subdued inflation rates, we expect the MPC to maintain rates unchanged in its upcoming meeting maintaining the attractiveness of treasury yields to foreign investors and also reflecting relatively tighter liquidity in the Egyptian banking sector.” Monette Doss added

It is worth mentioning that, in its last meeting on 25 June, the Central Bank of Egypt’s (CBE) Monetary Policy Committee (MPC) decided to keep rates unchanged for the third time after undertaking a 300bps rate cut on 16 March in an unscheduled meeting.  Egypt’s annual headline inflation accelerated to 5.7% in June from 4.7% in the previous month, with monthly inflation remaining subdued at 0.1% m-o-m up from showing no increase in May, according to data published by the Central Agency for Public Mobilization and Statistics (CAPMAS).